Thank you, alumnae, for a fantastic Hollins weekend! Video highlights of the Parade of Classes

Video of Dot Sowerby ’55 finishing the Race to Reunion 5K

for broad and inspiring personal or career achievements, volunteer service, or contributions to society

Mary K. Ralph Gaillard ’60: In 1981, she was the first tenured woman professor in the physics department at the University of California at Berkeley,and is now professor emeritus after a distinguished teaching career. Mary worked for CERN and the Fermi National Accelerator Laboratory. In 1973, she predicted the mass of the charmed quark before the particle was discovered, with Ben W. Lee. It was a ground-breaking discovery, and the breakthrough began the search for the Higgs boson, which has been called “the God particle.” A Singularly Unfeminine Profession: One Woman’s Journey in Physics, will be published this summer, chronicling Mary’s career from the inception of the “Standard Model” of physics, to her work that continues today, pushing beyond the boundaries of the “Standard Model.”

Ann Hopkins ’65: In 1978 Ann joined Price Waterhouse, and within five years she had brought the firm more business than any other candidate for partnership. Ann was the only woman among the 88 candidates. Shockingly, she did not make partner – not for poor performance but for acting “macho” and not in a “womanly” fashion. So, Ann sued Price Waterhouse – and won. Her case went to the Supreme Court and is considered a landmark ruling in employment discrimination. In her book, So Ordered: Making Partner the Hard Way, Ann writes: “I believe that Hollins, as a woman’s college, played an important role in my development… I learned how to depend on myself and on the analytical integrity of an answer…before I was taught to depend on or defer to members of the opposite sex or their point of view.” Her successful career and tenacity to fight what was essentially a “bad business decision” has changed the status of women in the workplace.

Wendy Larsen ’65Wendy was named to the prestigious list of The Best Lawyers in America for 2015. She came to Hollins with the class of 1965 but graduated in just three years as a member of Phi Beta Kappa. An attorney with Gray Robinson, her 30 plus year career has included land use planning services to more than 30 states and Puerto Rico. She has written numerous articles and legislation for more than 75 sets of land development regulations for communities as small as Barrington Hills, Illinois, and as large as Phoenix, San Antonio, and New Orleans. Soon after Wendy’s graduation from Hollins, she and her family made a gift to Hollins. In 1968 those funds established the Martin Luther King Scholarship at Hollins, which continues to this day.

Claire Sanders Swift ’85: A prominent national media consultant, Claire runs her own boutique firm as senior media strategist. Swift Global Media represents a range of high profile clients and nonprofits. A two-time Emmy Award winner, Claire is a voting member of the National Academy of Television Arts and Sciences and an active member of the American News Women’s Club, where she served as president from 2012 to 2014. She is also a great promoter for Hollins, having hosted an alumnae event at the American News Women’s Club, serving as chair of the DC area alumnae chapter, working with admission to recruit students, and participating in C3.

Kathryn McKellar ’05 (Distinguished Young Alumna): Kathryn is a rising opera star and accomplished artist in classical and music theatre. After graduating summa cum laude from Hollins, she earned her master’s of music degree from the Boston Conservatory, where she was a member of The Opera Studio. Whether in operatic, recital, or concert repertoire, her “radiant voice” and stage presence has garnered rave reviews in numerous recitals and performing arts projects across the United States and in Europe. Kathryn is on the artist roster of the Boston Lyric Opera, co-director of Opera on Tap Boston, and a member of Gamut, a vocal quartet championing the largely neglected genre of vocal chamber music.

for extraordinary participation in the life of Hollins

HOLLINS AWARD FOR VOLUNTEER EXCELLENCE (HAVE)

for excellence in volunteering for Hollins

Sabrina Rose-Smith ’00: Sabrina has served as a Reunion Chair, Reunion Gift Chair, and class fund chair for the great class of 2000. She hosted a Tinker Day party for area alumnae in DC. She has called prospective students and represented Hollins at multiple college fairs. She has shared her professional expertise with students at C3. She’s housed Hollins students during their January Term internships. Sabrina has also been a phenomenal member of the Alumnae Board. She always thinks strategically and cheerfully about ways she can help Hollins become even better. And, she was the FIRST person to register for Reunion 2015!

For superior athletic accomplishments at Hollins; sportsmanship, character, and leadership

lett Hedien ’95, fencing: She was a member of the fencing team from 1991 through 1995. In 1995 she was captain of the varsity foil team and led the team to Hollins’ first Virginia Collegiate State Championship title for varsity foil. She also placed second in the varsity individual foil event at the championship. In 1994-95, Heather received the All-Conference Academic Award. After graduation, she continued to fence and compete in USFA sponsored events through the Columbus Division. She won the Columbus Open in 2000 and 2003. She also won the Kentucky  Division Bourbon Open in 2001. Heather was named Great Lake Section Grand Champion in both 2002 and 2003.

for sustained commitment to the alumnae admission volunteer effort

Norm Ash ’00: An enthusiastic volunteer, Norm has demonstrated a sustained interest in supporting the Office of  Admission through attendance at prospective student parties in northern Virginia for many years as well as continually seeking new opportunities to engage her fellow alumnae in the admission effort. Norm has accepted the challenge of sharing Hollins with other young women. Since graduating she has referred over 30 prospective students of which seven have chosen to attend Hollins. Norm is an educator and she has very effectively used her platform to share the wonderful opportunities at Hollins with her students. If you are an educator please follow Norm’s lead and share the names of prospective students with us so we can share the Hollins experience with them also.

During a reunion year, alumnae commemorate their devotion by giving back — often with an increased gift amount. Reunion is also a time when classes focus their fund raising efforts to increase participation. The following classes are in the lead, as of reunion weekend – make your gift by June 30 to help your class win!

For the class with the highest participation in giving to Hollins Fund.
Class of 1965 with 57%

For the class among the ten most recent classes with the highest Hollins Fund participation.
Class of 2013 with 36% 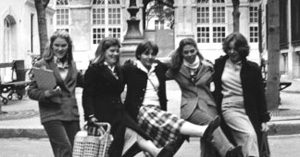 Jean Fallon, Berry Professor of Liberal Arts and professor of French, read excerpts from her collection of Paris abroad alumnae memories. Fallon weaves together a detailed history of the hallmark program through these recollections. Kirsten McKinney, director of international programs, gave an overview of the evolution of Hollins’ Abroad programs.

Current and former Hollins leaders reflected on the global and national social issues of the 1960s to today, and how they have impacted our campus. Our panelists were: Hollins president Nancy Oliver Gray, former president Paula P. Brownlee, and former chair of the board of trustees Anna Logan Lawson ’65, M.A. ’70. 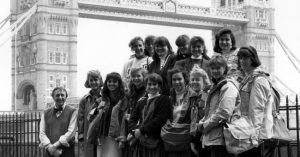 Friday afternoon’s alumnae panel featured a spectrum of distinguished alumnae who reflected upon their Hollins Abroad experience and how it impacted their lives. Panelists: 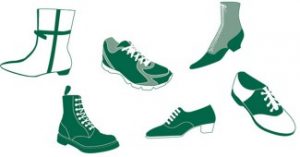 Thank you, reunion alumnae! We challenged you to participate in the Race to Reunion by referring a high school student of any age by May 30, 2015, to Hollins. You surpassed the goal of 300 new alumnae referrals, with 318 by Saturday. The Reunion class that referred the most students this year, and won the Race to Reunion, is: Class of 1985 with 50 referrals!

Each member of the Class of ’85 in attendance at reunion won a special Hollins beach towel.

The individual winner of the Race to Reunion, who referred the most students, is Lisa Bower ’05, MFA ’07, who referred 27 students!

Of the students who will enroll in the class of 2019, 10% were referred by alumnae and 50% of all referred students who were admitted enrolled. Those numbers are significant, and speak volumes about the value and importance of your referrals.  Please continue to refer students for the Classes of 2020, 2021 and beyond.  We truly appreciate your support. Refer a student today! 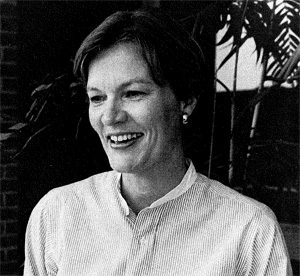 Alumnae shared memories of the former dean of students and alumna, Baylies Hearon Brewster ’57 (formerly Willey) at this special service held in duPont Chapel on Saturday, May 30. Former Hollins President Carroll Brewster also sent in his remembrances that were shared with the congregation.

Thank you to all alumnae who gave before and during Reunion weekend. Every gift counts and is a vote for your class – and Hollins! Give by June 30 to count in your class total!

Start planning now to attend your next reunion!

O fair maiden Spring, what hue will you bring
To our cause from your own sunny sheen?
You have brought for your part
the hue nearest your heart,
And spread Hollins’ hillsides with green.
And you, frosty Fall, the most brilliant of all,
What color for us do you hold?
You have laid your fair hand
with its torch on our land
And set our trees flaming with Gold.

The Green and the Gold we have lov’d it of old,
And to it we will ever be true.
For the mem’ry will last of the days that are past
And linger, dear Hollins, with you.
Oh, life, when we’re young,
is a song that is sung,
And must pass as a tale that is told;
But honor and praise to the end of our days,
We’ll render the Green and the Gold!

And still at the thought of the good she has wrought
Each heart must with gratitude thrill.
So to Hollins we’ll sing till the mountain tops ring
Our jewel of woodland and hill.
There are true, loyal friends that our college life lends,
And treasures of life manifold;
And may kind fortune bless with eternal success
Our Hollins, the Green and the Gold!