Ami Trowell teaches the first-year seminar, Performing the Unknown: Improvisation for the Stage and Beyond. She is the founder and creative director of Theatre3 in Roanoke and has been performing with Roanoke’s professional improvisation troupe, Big Lick Conspiracy, for over a decade. Trowell has studied improvisation at Second City, Chicago, and Dad’s Garage in Atlanta. She has produced and performed in several comedy podcasts including “What Just Happened?”, “All Purpose Cleaner,” “Purposefully Derpy,” and “BP & Ami.” Her most recent project, “Mother and Son Skype Shesh,” was the winner of both the Agoraphobia Film Festival and The Minefield Film Festival. Trowell received her B.A. in theatre from the College of Charleston and a M.A.L.S. from Hollins. She is currently pursuing her M.F.A. with the Hollins Playwright’s Lab and is the proud mother of three smart, funny, and amazing daughters. 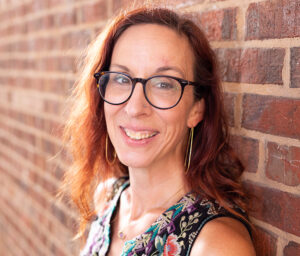