David McGee has been named head coach of the Hollins volleyball team.

Prior to his time James River, he was the head coach at Bath County High School from 2004-2012. He took Bath County to three-straight VHSL state semi-final appearances, bringing home a state championship in 2011. He was also named the 2011 VHSL Coach of the Year. He developed a feeder program for youth volleyball in the Bath County area and helped the team to a winning season in his inaugural year, the school’s first in over 20 seasons. In his nine years at the helm at BC, he was voted the District Coach of the Year five times and Region Coach of the Year three times.

McGee graduated from Virginia Tech with a bachelor of science degree in mathematics before earning his master’s degree in kinesiology with a focus in sports psychology from A.T. Still University, in Mesa, AZ. 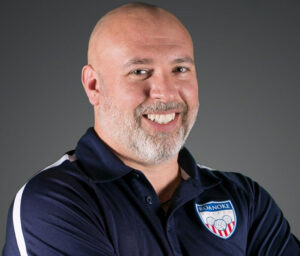