John Steven Gurney is the author and illustrator of the graphic novel Fuzzy Baseball and the picture book Dinosaur Train. He has illustrated over 140 chapter books, including the A to Z Mysteries, the Bailey School Kids, and The Calendar Mysteries series. He has illustrated board games, advertisements, posters, puzzles, and a shopping bag for the Macy’s Thanksgiving Day parade. John has worked as a caricature artist from Atlantic City to Las Vegas, to the streets of New York City, but now he primarily works in New England. Gurney grew up in Pennsylvania reading Dr. Seuss books and watching Bugs Bunny cartoons. As he grew older his reading material shifted to Mad Magazine, and then to JRR Tolkien (but he never stopped watching Bugs Bunny cartoons). He studied illustration at Pratt Institute in Brooklyn, NY, and received his M.F.A. in illustration from the Hartford Art School. 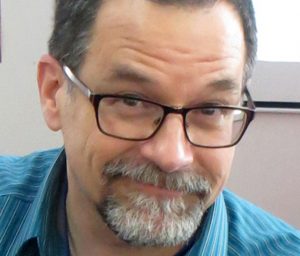