Nathan Lee is a scholar, critic, and curator whose research examines the impact of digital technologies on the form, aesthetics, and theorization of contemporary cinema. In addition to his academic work, he has published extensive film criticism in The New York Times, The Village Voice, and NPR, and is a longtime contributor to Film Comment. Before coming to Hollins, he taught courses in film and media studies, contemporary art, critical theory, animation, and gender and sexuality studies at Emory University, Georgia State University, Brown University, Rhode Island School of Design, Bryant University, and Bard College. His teaching ethos is informed by a passion for collective inquiry and the formulation of questions rather than answers. When asked the impossible question “What is your favorite film?” he will answer: David Cronenberg’s Crash (1996). When not engaged in professorial duties, he can generally be found vacuuming up after his dog Luba.

My current research explores the relationship of contemporary film theory to debates in the humanities over the legacy of critique. I am interested in why foundational concepts such as “the apparatus,” “textuality,” and “ideology” have been displaced by a turn to affect, phenomenology, and various appeals to embodiment and the corporeal. My investigations into these matters are linked to a concern over the acceleration of post-truth politics and culture, and I am thinking through how the disavowal of certain theoretical practices of critique are aligned with a more generalized crisis of reading – closely, carefully, symptomatically. Alongside this scholarship, I have recently published criticism on such films as Crimes of the Future, Licorice Pizza, Annette, Inland Empire, and Speed Racer. 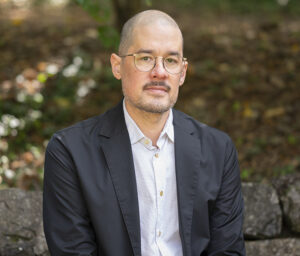