Sherri West is director of Hollins University’s equestrian program and head riding coach. She oversees all aspects of the program, including teaching classes, conducting practices, and preparing the equestrian team and individual riders for competition in the Old Dominion Athletic Conference (ODAC) and the Intercollegiate Horse Show Association (IHSA).

West comes to Hollins from Virginia Tech, where she served as equitation instructor and equestrian coach since 2007 and has guided a number of regional and national champions in intercollegiate competition. She led Virginia Tech to its highest finish ever at the IHSA National Championships, and has also successfully coached riders to major victories at Southwest Virginia Hunter Jumper Association (SWVHJA), United States Equestrian Federation, and United States Hunter Jumper Association shows. In addition to her achievements as a coach, West has served in leadership positions for the IHSA, the SWVHJA, and the American National Riding Commission. 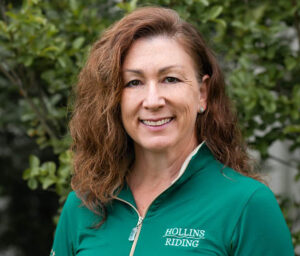