Martin is a playwright, dramaturg, and director as well as the department chair of the undergraduate theatre department at Hollins. She has a Ph.D. in interdisciplinary arts and theatre from Ohio University with a focus on intersectional feminist theatre and 20th/21st century women-identifying playwrights, and an M.F.A. in playwriting from The Playwright’s Lab at Hollins. For over 25 years, Martin has taught, directed, and performed in Europe and the U.S. Her work has been produced in Germany, The Netherlands, Australia, Japan, Ireland, and the U.S., and published by Smith & Krauss, Theatrefolk, and YouthPLAYS. She is a proud member of the Dramatists Guild, the Association for Theatre in Higher Education (ATHE), the American Society for Theater Research (ASTR), and the National Women’s Studies Association (NWSA). In her current capacity as theatre department chair, Martin’s focus is on diversity, equity, and inclusion both in her department and campuswide. In addition, she trained as a search advocate through the Search Advocate Program at Oregon State University and is currently engaged in creating more equitable and inclusive faculty searches at Hollins. 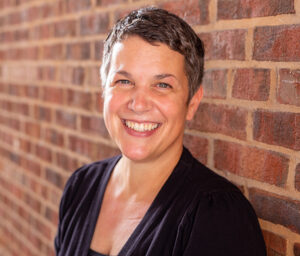